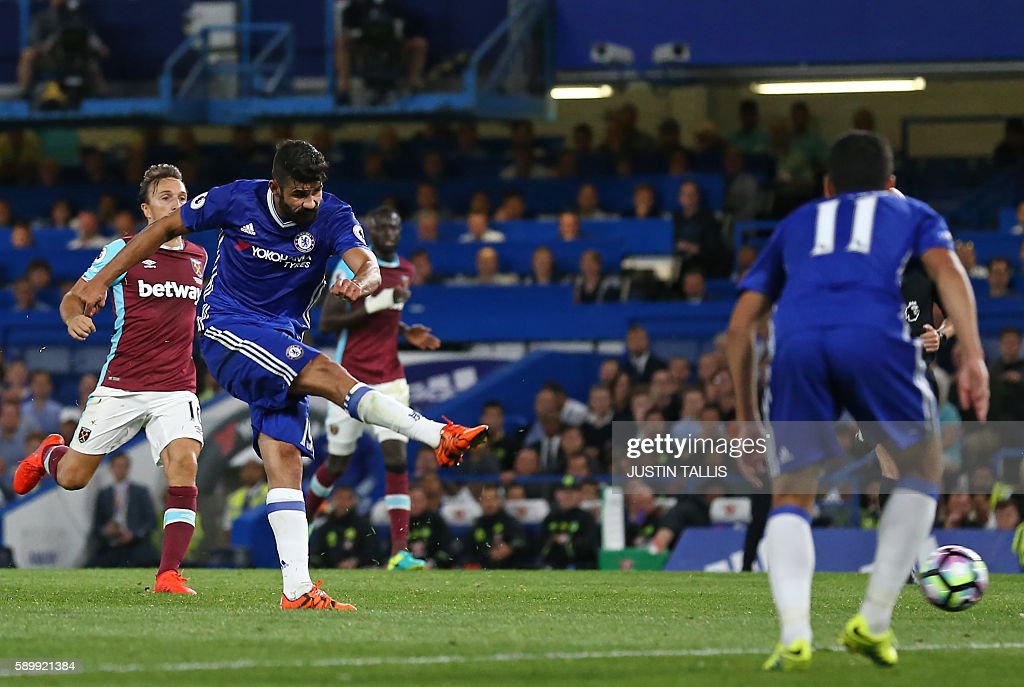 Chelsea’s 2016/17 Barclay’s Premier League campaign has now gotten off the ground and what better way to announce the start of resurgence than a victory in-front the fans. In the league’s first derby, West Ham fell on a late dagger to the heart from Diego Costa following goals from Eden Hazard then James Collins. It may be early days, but it doesn’t hurt to assess Chelsea’s first competitive match under new manager Antonio Conte and how the lads fared.

Much was said of the 4-2-4 formation that Conte wished to implement in preseason and for the first few matches it was showcased. It didn’t take long for the Antonio to realize that this wasn’t the means to get the best out of the players at his disposal. Nearing the end of this season’s preparations Chelsea reverted to a lone-striker system which coincided with better performances. Chelsea used a 4-2-3-1 formation for most of the match against West Ham and only reverted to a 4-2-4 when chasing the victory. The classic partnership between Michy Batshuayi and Costa that produced the winner was a sight to behold. In the modern game, the two striker system will likely leave Chelsea short-staffed in the midfield against good teams. Notwithstanding,it still remains a good contingency plan against compact defenses in the plight of notching a result.

Even though the very good Senegalese international desires the move, efforts to add Napoli’s Kalidiou Koulibaby to the ranks has so far proven futile with a bid recently rejected. It should only be a matter of time till he arrives and Kurt Zouma is still recovering. In the mean time, the familiar old guard of Terry, Ivanovic, Cahill and Azpilicueta took the reins in defense and stayed solid under pressure early on as Chelsea were pegged back. By the 15-minute mark, Chelsea had grown into the match and they had the lion’s share of possession with little threat from the Hammers. All in all it was a comfortable day at the office against a West Ham attack without the talents of Dimitri Payet and Manuel Lanzini starting. The real tests are yet to come.

Hazard Looks Up for It

While Chelsea’s downfall of last season can’t be solely put to one man, it doesn’t spell well when your best player is under-performing and a ripple effect from that isn’t uncommon. Eden Hazard suffered an abysmal 15/16 season by his standards and showed glimpses of his true self only at the tail end of the season. That trend continued into the Euros then preseason and finally against West Ham. The goals have definitely returned and starting the campaign with another is a great booster of his confidence along with turning defenders inside out with ease. We can look forward to great things again from the Belgian.

Clear-cut Chances Few and Far in Between

We see it all too often. Chelsea goes in front, takes their foot of the gas then concedes a goal and it’s back to square one. The team lacks that ruthless instinct to put games like this, where they’ve clearly been the better team, to bed which is unacceptable. Conte may soon realise that without Cesc Fàbregas in central midfield, gluing attacks together will not be as easy. Chelsea often looked disjointed on the day. They looked promising on the ball and did well to win balls in the midfield (Kudos to Oscar and new signing N’Golo Kanté) but when it came to creating meaningful chances in the final third, the attack came up short too often bar Man of the Match Hazard. It is known that Conte fancies a hard working team and Fàbregas isn’t the quickest at covering ground so his exclusion is understandable. However, finding the balance between industry and creativity across the team is the optimal approach and should be the priority going forward. The team is a better one with the Spaniard in it and one can only hope a compromise is met sooner rather than later.

Everyone can agree that the rehabilitation of the team has only just begun. It would be harsh to be critical at such an early stage as it will take some time for the team to be a reflection of the manager. In the little time so far, it’s safe to say that Antonio is able to adapt his methods to his players as well as not being afraid to make some big decisions in who he selects in his starting XI. Nonetheless, it was important for Chelsea to get off with a good start which puts the lads in the best frame of mind to keep on growing from strength to strength with an away fixture at Watford next in line. Under the guidance of one of the most effervescent personalities in football, if it’s one thing that’s unquestionable, once pastures are green, the Chelsea fans will absolutely love their new manager.

All About Transfers – Fred and Jorginho

Too Late to Say Sarri?

B90M Staff - January 5, 2017
0
No matter how often the calendar changes like it has to 2017, the debate about who is the best footballer at each position is will...

Robert Simpson - September 12, 2015
0
In this week's challenge, Bobby goes up against B90M columnist Llemar Nicholson. One point is awarded for the correct result and three for the correct...

ABOUT US
B90M is THE refuge for football fans after the final whistle has sounded. The love of the game, on and off the pitch, before, after and Beyond 90 Minutes.
Contact us: info@b90m.com
FOLLOW US
© 2019 Beyond 90 Minutes
Login
Register
Registrations
Payments
Personal Details